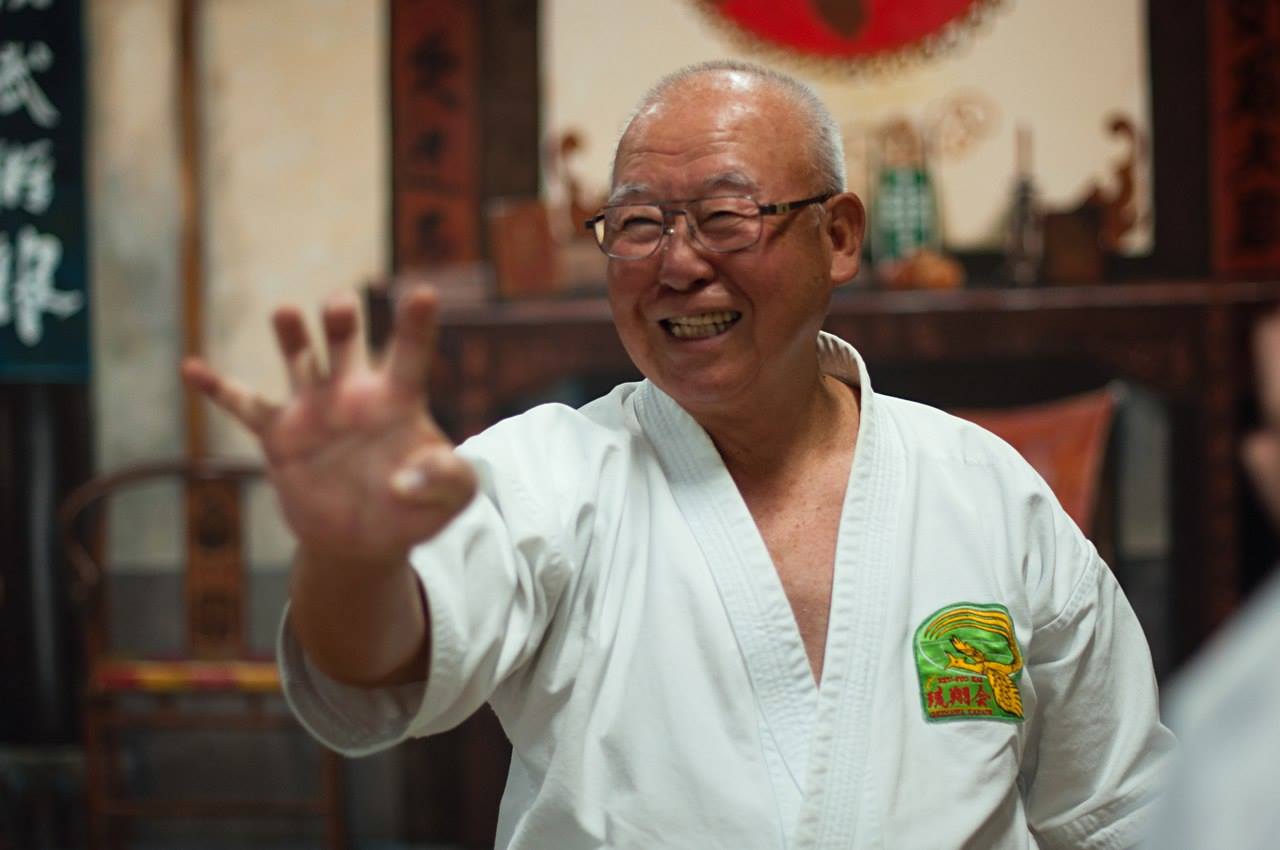 This interview was conducted in the kitchen of the house where I lived, in August 2018. Senaha sensei, as well as Steve and Nancy Lyons senseis arrived in Moscow to conduct a seminar on Goju-Ryu Karate.

Many thanks to Nancy Lyons for helping me translate into Japanese.

In an interview with Senaha Sensei, who is a devoted student of Yagi Meitoku and has been practicing Goju-Ryu for over 60 years, he shares his experience and memories of events from the world of Karate, of which he was a participant.

[Note: author’s comments can be found in the square frames inside the text]

1 Pavel: Sensei, what is your full name and maybe you have warabina [child name] or tounna [chinese name]?

Senaha: My name is Senaha Shigetoshi, my Okinawan child name was Tarou.

2 Pavel : And what is Chinese name?

Senaha: My family name was Ryou.

3 Pavel: It was a family name long ago? [Sensei’s family descended from chinese 36 families.]

4 Pavel: Who was your father and mother?

5 Pavel: What was their occupation?

Senaha: Father worked on the lumber plant and mother helped on the company.

6 Pavel: What was the birthplace of sensei?

7 Pavel: Sensei was born in 1941 and his childhood was during war times. What was it like after war on Okinawa?

Senaha: We escaped from Naha to northern part of Okinawa. Those times was no food  etc..

9 Pavel: I want to ask something about karate now. When sensei first started karate, what style and why?

Senaha: I started in 1958 august in Yagi dojo

Steve Lyons: And maybe a little Matsubayashi-Ryu before that.

Senaha: Yes when I was a schoolboy I practiced Matsubayashi-Ryu a little bit.

Senaha: I was small. And I was in school with children of eight years old while I was just turned seven.

Senaha: My father chose Yagi sensei, because they were both from Kume district, both from 36 families.

12 Pavel: Who was sempai in Yagi dojo those times?

Those times they were all sempai to me, but after that I trained hard and passed many of them. I become sempai to all of whom I mentioned as sempai.

13 Pavel: I heard the name Sakiyama now and before. What is relations between Senaha and Sakiyama families?

Senaha: In older days it was all Sakiyama family. But in old culture sometimes when you get a land you change your name. That’s how my family became Senaha. We came from Yomitan lands to Senaha lands.

14 Pavel: That is very interesting. .. What kind of person was Yagi sensei? What was it like to train under him?

Senaha: Yagi sensei was very kind person. as for the question about training, on the start of training it was punching and blocking and walking basics, kihon, sanchin.

15 Pavel: What was the relations of Senaha and Yagi outside of the dojo?

Senaha: When Yagi sensei went somewhere, I followed. And when his boots was dirty I polished it with my handkerchief. And when Sensei was looking for a chair I always bring him a chair.

Senaha: I was looking to Yagi sensei as a deity, like a karate deity. And some kohais and sempais in dojo asked me: “Why do you do that, we look bad because of that?”

16 Pavel: I would like to ask more about sensei’s life, what was his occupation?

Senaha: After I graduated from trade school I went to Mainland to Nagoya to work there. I worked in Mitsubishi there to make foot heaters.

17 Pavel: Do you have any brothers or sisters?

Senaha: Four of us one elder brother and elder sister and younger sister.

18 Pavel: Did they practiced karate too?

Senaha: Only my older brother who practiced Matsubayashi-Ryu in school.

19 Pavel: And what about your children? How many do you have and does they practice karate?

Senaha: I have three children, they practiced long ago but now all of them stopped.

20 Pavel: Is there someone else from Senaha family who practice Goju-Ryu now?

Senaha: Senaha Sacchio, but he is too busy with work and family to come to the dojo regularly and practice.

21 Pavel: Yesterday we spoke about Senaha Tattoku and Senaha Taishou, can you tell us something about these persons?

Senaha: Senaha Taisho was the first person from Sakiyama family who switched to Senaha. He get to history because he went to China with Sapposhi mission that’s why he is in lineage of karate. I did not know that my ancestors did karate until I knew that there were a kata named Senaha Suparimpei.

[Senaha (Sakiyama) Tattoku corresponded with Miyagi Chojun and had a letter with explanation about a way to practice Sanchin Kata. That letter survived the war and later was inherited by Senaha sensei.]

23 Pavel: I see, a political decision for his life. And what about Japanese and Okinawans relations now?

Senaha: Now it changed, it is better now. But I don’t feel very good, here is many bases on Okinawa. Japan don’t want it in Mainland, so it is all here in Okinawa.

24 Pavel: There is a local dialect on Okinawa, uchinaguchi.  When we practice karate sometimes we hear words like jichi, muchimi, gamaku, chinkuchi and we can’t find there words in Japanese language.

Senaha: Yes there aren’t these words in Japanese. Gamaku is the way to move your waist, when you kick, you do it.

25 Pavel: When I think about muchimi then I think that Kanji could be like Muchi like Mochi a cake, and Mi is like miru Ken [To see.].

Senaha: No it is not. Muchimi means soft. In Gojuryu Karate it is hard and soft, muchimi is the soft part.

Nancy Lyons: But I can tell you that all Okinawan Hogen [Dialect] uses no kanji, only katakana.

Senaha: Chinkuchi is like connected tendons and bones, but not to lock everything ultimately. It is about how to make a strike, how to throw a hand to make a best effect.

27 Pavel: If we can speak a little about history? If sensei knows something about Chinese roots of Goju-Ryu and about Ryuryuko?

Senaha: I only know that long ago Higaonna Kanryo learned in China from Wai Shinzan and Ryuryuko.

28 Pavel: Nakaima family from Ryuei-Ryu claims that their style also goes from Ryuryuko. How does Senaha sensei think is it the same Ryuryuko or not?

Senaha: Yes I think so. Probably. Some people call that person Do ru ko or To ru ko. Maybe Ruru is a name and Ko is like “mister”.

[For western world ears okinawan syllables sometimes misheard, for me Ru and Ro sounds more like Du and Do.]

29 Pavel: Some people say that Higaonna Kanryo learned kobudo in China. Usually in China they practice both bare handed techniques and weaponry. But Higaonna Kanryo never taucht any kobudo to his students. Maybe Senaha sensei knows why?

Senaha: I never heard about it, only about karate. I am sorry to say the following because Steve practice kobudo.. [here sensei laughed] Long ago on Okinawa people of higher ranks practiced karate and kobudo was for commoners and farmers and maybe criminals.

30 Pavel: Yesterday sensei told about his family name “Se Na Ha” that it has 3 kanji and it means that it came from Shizoku, warrior class. Is it so?

Senaha: Yes it is. My relative Senaha Kenko went to Brazil and took some family registration list and it was said that it was Shizoku. Document originated from Old city hall where they listed higher rank people of Okinawa. Now all people are equal but before on Okinawa there was ranking system.

31 Pavel: Was it Kume Shizoku?

Senaha: I don’t know maybe what you are telling is correct, but those days if you are Shizoku you didn’t need to prove where you are from.

32 Pavel: Can you tell some interesting stories about Higaonna Kanryo and Miyagi Chojun? Maybe Yagi sensei told you some?

33 Pavel: Maybe Senaha sensei knows something about Shiroma Shimpan who was a student of Higaonna Kanryo, but he never started his school?

Senaha: Yes I heard that name but I don’t know what he did and his story.

34 Pavel: I heard that some people who practiced with Miyagi sensei before studied under Higaonna Kanryo sensei, like Higa Seiko, Shinzato Jin’an, is it true?

Senaha: Maybe not, if you look at their age.. maybe they weren’t born yet.

35 Pavel: People claim that Higa Seiko was young but still practiced for a short period with Higaonna Kanryo.

Senaha: Maybe.. but then he was a student of Miyagi sensei. Miyagi Chojun had his dojo but Higa Seiko sensei made his own dojo without permission and Miyagi Chojun became angry and expelled Higa Seiko. And then Higa Seiko sensei came to Itoman Police station where Yagi Meitoku worked in that period and studied Seipai, Kururunfa, Suparimpei under Yagi sensei. After that Toguchi Seikichi, a student of Higa Seiko also come to Yagi dojo to learn these kata amd I was doing it for him.

36 Pavel: I also heard that Yagi Sensei went to Yamaguchi Gogen dojo and teach there, is it right?

37 Pavel: What about Izumigawa kanki? Does he studied only under Miyagi sensei? Where he studied later?

38 Pavel: Toguchi sensei and Yagi sensei were a friends, right?

Senaha: Yagi sensei’s daughter went to mainland and stayed in Toguchi sensei’s house. You can judge by that.

39 Pavel: Can I ask a little bit about kata. How it was in old days? Is it true or not that Naifanchin kata was in Gojuryu system before?

40 Pavel: That’s interesting! And does sensei knows about katas under names Happoren or Pecchurin?

41 Pavel: I read an article of Miyagi Chojun where he states that in old days they practiced sanchin and happoren like breathing katas.

Senaha: I saw a name Happoren in one of your books yesterday. I think that those Kanji can be read like happoren or pecchurin. [It was a book about Touon-Ryu system.] I think that Pecchurin and Suparimpei is the same, but some people think that it is different katas. [In my investigations later I found that Pecchurin differs from Suparimpei by kihon, embusen and techniques itself.]

Senaha: Maybe Higaonna Kanryo made these katas by himself I will investigate on Okinawa. Maybe Mayaa Arakaki [Arakaki Seisho].. I have many books and try to learn about this. I don’t want to make a mistake?

43 Pavel: I am asking about it because that set of Katas is the same in different schools. Goju-Ryu, Uechi-Ryu, Touon-Ryu, Ryuei-Ryu all have Sanchin, Seisan, Sanseiru.

Senaha: Maybe Mayaa Arakaki.. i will investigate, don’t to make a mistakes. Tensho, Gekisai Dai Ichi and Daini are definitely made by Miyagi sensei.

44 Pavel: Sensei, thank you very much for your knowledge and sharing!

[Some time later, I received a message from Sensei in which he presented the result of his research about the origin of the Goju-Ryu Kata. A photo of the letter and its translation are presented below]

He taught these kata to his students Miyagi Chojun and Kyoda Juhatsu.

Miyagi Chojun, Go Kenki, To Daiki. It is not known exactly who and to what extent influenced the adoption of the following kata in the Goju-Ryu system and whether they were made by these masters or taken from other schools.

[A few more words about Katas: